Benjamin Koppel, Danish saxophonist and composer, is one of the most award-winning musicians of his generation, known for his versatility and virtuosity.

Koppel’s influences are broad, but they start with his family. Koppel, a stellar player and renowned composer, is the grandson of noted Danish classical composer Herman D. Koppel. His father, Anders Koppel, is a well-known and successful Hammond organ player and a composer and the family in general is full of music and creativity. 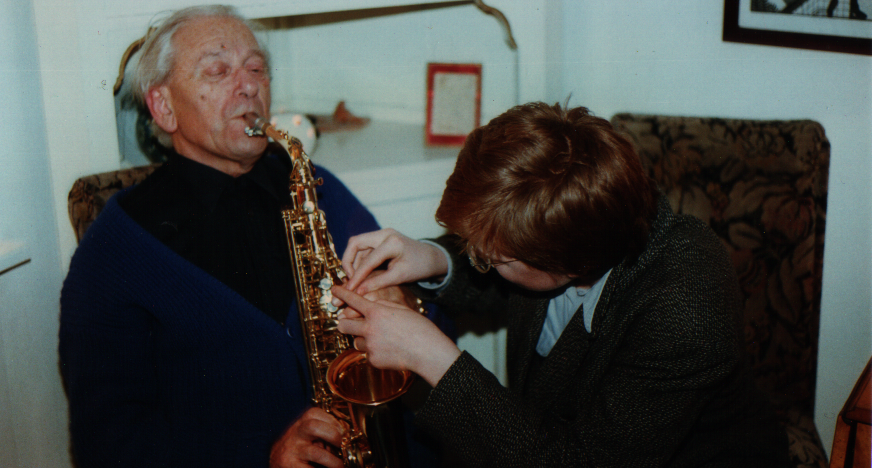 Benjamin Koppel’s saxophone sounds sweet and full tone that comes more out of his heroes Cannonball Adderley and Johnny Hodges than, say, John Coltrane (whom he also admires). His approach is contemplative and not hectic when he pours out blazing bebop licks, quick and smooth. His superb playing has put him in the company of Kenny Werner, Jim Hall, Joe Lovano, Scott Colley, Miroslav Vitous, Randy Brecker, David Sanchez, Sheryl Crow to name a few.
He has jazz groups and plays classical, pop, R&B, folkloric music and almost anything in between. As a composer, he writes in those genres and is not afraid to take on large scale projects and compose music for a theatre performance, put together two festival programs per year and write a book whenever there is a break.

At the age of 15, he was co-founder of the Tournesoul soul / rock orchestra and also formed his own jazz quartet, which in 1993 released the debut cd Benjamin Koppel Quartet. In 1992, as the first jazz musician, he received the great award of the Jacob Gades Legacy. He studied in New York at the Cuban saxophonist Paquito D’Rivera and in 1995 he co-founder of Mad Cows Sing crossover ensemble, with 4 classical and 3 rhythmic musicians highlighting strongly in Denmark as well as on the international music scene. In 1997 he performed Anders Koppel’s Saxophone Concerto No. 1 and 2004 Saxophone Concert No. 2. In May 2015, the third CD with Koppel as a soloist with Symphony Orchestra was released, Double Triple Koppel (Dacapo records) where Koppel plays with Michala Petri and the Odense Symphony Orchestra.

Since 2012 member of the trio Koppel-Colley-Blade Collective together with bassist Scott Colley and drummer Brian Blade, who released their first CD “The Koppel Colley Blade Collective” at Artistshare (USA) in May 2015.

Koppel has received a wide range of prizes and honors through the years. Palæ Bars Jazz Prize (the year after Kenny Drew, the year before Duke Jordan), the Jacob Gade Prize, Holstebro Music Prize, and others. Was also named Knight of France, Chevalier des Arts et des Lettres in 2011 for his musical work.